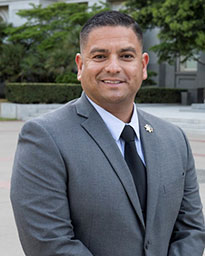 He began his career as an Investigator Trainee in the Van Nuys District Office during which time, he has promoted to the ranks of Investigator, Supervising Investigator, and Supervising Agent in Charge, within four district offices from Bakersfield to Palm Desert.

Prior to his promotion to Division Chief, Gonzalez served as Deputy Division Chief for over two years. Prior to his promotion to Deputy Division Chief, Gonzalez was assigned to oversee the Riverside District Office which oversees the largest county in the United States, San Bernardino County.  In addition, he was tasked with overseeing the Department’s largest enforcement efforts at the Coachella and Stagecoach Music Festivals in Riverside County.   His leadership was instrumental in reducing youth access to alcohol and keeping the annual festivals safe for the thousands of attendees.

He has been a Field Training Officer and Department Defensive Tactics Instructor for the past 15 years.  He appreciates the opportunity to mentor and improve the skill sets of employees throughout the Department.

In 2005, Deputy Division Chief Gonzalez was recognized by the National Liquor Law Enforcement Association as Liquor Law Enforcement Co-Agent of the Year.  This was as a result of a three month undercover narcotics investigation inside three heavily infiltrated bars frequented by local gang members.  Then ABC Director Jerry Jolly stated, “Robles and Gonzalez are most deserving of this honor, their work has improved the Hollenbeck Community and made it a safer place to live and work.”

He credits the Department’s partnership with the Los Angeles Police Department and the community on a successful investigation.

Deputy Division Chief Gonzalez holds an A.A. degree in Administration of Justice and a Specialized Management Certificate from the Commission on Peace Officer Standards and Training (POST).

He also attended the 104 hour POST Management Course which in key area such as leadership, community-oriented policing, strategic planning, and critical incident provided instruction management.  He believes his responsibility as an executive team member is to create more leaders by mentoring and offering guidance.

He and his wife enjoy spending countless hours watching their three daughters participate in youth sports.