The Law and Illicit Drugs

Drug offenses can be felonies or misdemeanors that can be punishable by imprisonment, probation, community service, or fines. Illicit drug activity hurts your business reputation and increases the risk of injury and death due to fights, assaults, and driving under the influence.

ABC may revoke a license if a retail licensee has knowingly permitted the illegal sale, or negotiations for such sales, of narcotics or dangerous drugs upon their licensed premises (Section 24200.5(a) Business and Professions Code). This may also be grounds for the implementation of an administrative emergency order proceeding if the conduct at the licensed premises continues to present a danger to the community.

A licensee has a general affirmative duty to maintain a lawful establishment. That duty imposes an obligation on the licensee to be diligent to avoid possible unlawful activity, and to instruct employees accordingly. Once a licensee has knowledge of a violation of law, that duty becomes specific and focuses on the elimination of the violation. Failure to prevent the problem from recurring once the licensee has knowledge, is to “permit” that activity by failure to take preventive action.

ABC will generally not hold a licensee liable when the licensee; (1) does not reasonably know of the illegal activity (for example, surreptitious transactions between customers not involving the licensee or employee); and (2) has taken all available reasonable steps to prevent the illegal activity (for example surveillance cameras and drug policies). Measures should be taken by all licensees to detect drug activity on their licensed premises.

If the licensee is directly involved in the illicit drug activity, the law states that all assets, including the ABC license, may be seized, and sold after 10 days’ notice (Section 25375 Business and Professions Code).

Per Section 24202(b) of the Business and Professions Code, the Department may not open or add an entry to a file or initiate an investigation of a license or suspend or revoke a license (a) solely because the licensee or an agent, acting on behalf of the licensee, has reported to a State or local law enforcement agency that suspected controlled substance violations have taken place on the licensed premises, or (b) solely based on activities constituting violations described in such a report, unless the violations reported occurred with the actual knowledge and willful consent of the licensee.

To guard against losing the ABC license, licensees should have a “zero tolerance” policy for drug activity. This means taking active steps to prevent it inside and outside the business.

The number of drugs and drug combinations that are being used and sold in the workplace is staggering. For licensees, managers, and employees, a basic knowledge of drugs used and sold is needed to prevent illegal activity.

Cocaine – A highly addictive drug that ups the levels of alertness, attention, and energy. You may hear it called a stimulant. Cocaine is usually smoked or inhaled.

Ketamine – Ketamine is used by medical practitioners and veterinarians as an anesthetic. It’s sometimes used illegally by people to get high and is a dissociative drug, which means it acts on different chemicals in the brain to produce visual and auditory distortion, and a detachment from reality – it’s commonly considered a “club drug”. Ketamine is usually swallowed, inhaled, and smoked.

Heroin – A highly addictive analgesic drug derived from morphine, often used illicitly as a narcotic producing euphoria, slows down the body’s functions causing drowsiness. This drug is normally injected but can also be inhaled or smoked.

Methamphetamine – Methamphetamine is a powerful, highly addictive stimulant that affects the central nervous system. Meth is commonly inhaled or injected. When ingested, it speeds up the body’s functions, causing the user to become hyperactive, talkative, emotionally excited, or paranoid.

Ecstasy (methylenedioxymethamphetamine or MDMA) – An illegal drug that acts as both a stimulant and psychedelic, producing an energizing effect, as well as distortions in time and perception, and enhanced enjoyment from tactile experiences. A common “club drug” whose users are predominantly adolescents and young adults.

Drug paraphernalia is any product that a person may use for packaging, storing, using, preparing, or selling illegal drugs. This includes, but is not limited to scales and balances, diluents and adulterants, capsules, balloons, envelopes, paper bindles, hypodermic syringes and needles and pipes.

It is a misdemeanor crime for a licensee or a licensee’s employee to sell any drug paraphernalia when they know or reasonably should know that the customer is going to use the product for any purpose involving an illegal drug. A licensee is presumed to have knowledge if ABC or any other state or local law enforcement agency notifies the licensee in writing (see Form ABC-546-A). (Sections 11014.5, 11364.5, l 1364.7(a) and 24200.6 Health & Safety Code)

Selling drug paraphernalia is a crime and could result in your arrest and the loss of your ABC license.

Section 24200.6 of the Business and Professions Code states that the Department may revoke or suspend any license if a licensee, or the agent or employee of the licensee, is deemed to have knowledge that an item in their establishment is being sold as drug paraphernalia. If ABC or any other state or local law enforcement agency notifies you in writing that something is commonly sold or marketed as drug paraphernalia, protect yourself and your ABC license by immediately removing those items from your store.

The following items, either alone or in combination, are commonly sold or marketed as drug paraphernalia.

Due to the ever-changing nature of illegal drug activity and the types of drug paraphernalia being used, there may be other items not listed below: 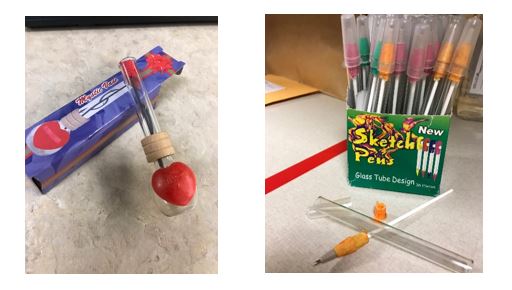 The above rose glass vase and glass tube pens are sold by suppliers who may tell you that they are gift/novelty items. However, their primary known use is as a pipe to smoke drugs such as crack cocaine or methamphetamine. Drug users will remove the rose or other contents, insert a piece of wiry sponge or scouring pad as a filter, and use it to smoke crack cocaine. The tubes are commonly displayed in a box near the cash register counter (pictured at the right).

This form shall be deemed official notice to you under Section 24200.6 of the Business & Professions Code. However, keep in mind that this law does not preempt local ordinances that prohibit drug paraphernalia sales.

ABC Agents and local law enforcement officers are actively investigating the sale of drug paraphernalia (Section 11364.7 of the Health and Safety Code).

The following are some signs that illegal drug activity may be occurring in or around your licensed establishment:

Additional information may be obtained by contacting: